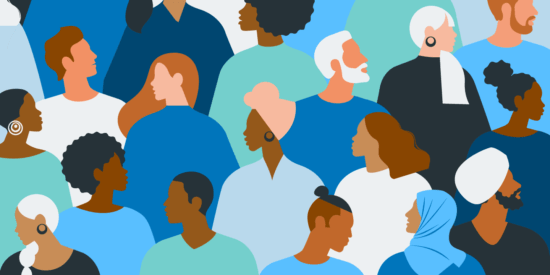 As a leader, you must strive to get clear on this single non-negotiable objective: to ensure that you design a workplace culture where everyone belongs, and feels heard, seen, and valued.

It all starts with you leading the change.

I’ve been a Canadian for almost 50 years, yet as a Muslim Lebanese growing up in the West, I constantly felt like I was living in someone else’s home. Although Canada prides itself on being an inclusive host country, you can surmise from its official holidays that multiculturalism hasn’t truly been ingrained into its social constructs. For as long as I remember, I would spend Easter Sunday around the tube with my folks watching Moses part the sea. That miracle always felt more real than believing Canada would welcome me as its own.

But I did it. I made Canada mine. In the spirit of diversity, I embraced the opportunity to celebrate Easter and Christmas with Christian friends, making sure whenever possible to share highlights of my own culture. I made the mountain come to me.

Diversity is not just about religious beliefs

The official holidays reflect traditional Christian values, but there are almost forty different characteristics of diversity, from race, ethnicity, age, and citizenship status to education, income, skills, upbringing, national origin, and ability, to name a few. And while diversity is a fact, inclusion is an intentional choice we must make to ensure that everyone is treated equitably so they feel like they belong. Whether you’re a black Muslim woman in hijab, a Sikh man with a turban, or identify as a two-spirit indigenous, you can still have a seat at the table.

Celebrating diversity sounds pragmatic but practicing inclusion requires much effort. Just looking at our collective experiences during the pandemic reveals how deep-rooted privilege is in our communities and that we are still unravelling the prevalence of systemic racism within many social constructs.  At the height of the pandemic, a racial awakening rocked many American cities and shifted our attention to these inequalities. Shortly after the murder of George Floyd, as many as 76% of Americans felt that racial and ethnic discrimination was a huge problem, and 55% of U.S. adults expressed support for the Black Lives Movement, according to a Pew Research Center survey. But feelings alone don’t bring about real and lasting change.

Even with many well-intentioned attempts to raise awareness and challenge biases, our efforts can feel reactionary and demonstrate a lack of consistent and fair behaviour toward all groups. And while organizations expressed support for BLM or denounced hate against Asian communities, these actions started to feel like a short-term checkbox activity. The general feel of “us versus them” lingered throughout our institutions.

Recently, the global reaction to the horrors of the Ukraine war also demonstrated selective support for those who were more like “us”, and lukewarm regard for victims who were among “them.”

Our biases continue to hold us back from further exploring the humility in our humanity. When it comes to inclusive intentionality, we must see ourselves as a larger human community, that although we may come from many different backgrounds, we form one nation: humankind.

Real change requires a sincere and consistent effort to withhold judgment on those we see as different, and who may hold different values or political views than our own. Consider the divisive battle that waged on Canadian streets between supporters of the government Covid mandates and their opponents.

Being intentional within the workplace community means leaders strive to practice inclusion, not as a noun, but as a verb because by inviting diversity to sit at the table where everyone is treated equitably, their values are welcomed, and their voices are heard. This is how we start ensuring real work translates into real change and commit to practicing equity through belonging.

But where do we start?

In her TED talk that has garnered almost a million views, Yassmin Abdel-Magied explains that we can challenge our biases by mentoring others at the other end of our spectrum and showing them doors that they didn’t even know existed.

When we connect with people with whom we don’t have any shared experience, we learn, grow, and empathetically ally not in a tokenistic but in an empowering way.

Widen the Circle of Inclusion

In Leaders Eat Last, Simon Sinek defines a “Circle of Safety” wherein the goal of the leadership is to give people a sense of belonging and offer them a strong culture based on trust, empathy, and a clear set of human values and beliefs with the power to make decisions. Within the Circle of Safety, we feel valued by our colleagues, cared for by our leaders, and confident that they will do what they can to help us succeed.

When we seek to widen the circle, we move aside and allow space for others to walk into the circle on their own, drawing closer to the safety of its center, a place traditionally reserved for those from within the dominant culture who set the rules. Widening the circle means we all feel safer.

Leave empty chairs at the table

Look around you. If everyone at the decision-making table looks, sounds, and talks like you, there will be little diversity. When there are empty chairs, others will feel they can step forward and sit by your side. Learn to listen to those who are courageous enough to join you, learn from their experiences, love them authentically, and empower them to lead.

This establishes community, builds trust with its members, and encourages diverse perspectives where people want to speak up and weigh in. It also invites innovation and creativity.

At these leadership tables, we must work hard to ensure there is ample representation from those who don’t think, look or speak like us and that we’re not threatened by their presence or what they bring to the relationship. When we nurture trust, we will feel safe enough to be vulnerable and let down our guard to share, make mistakes, and know that we won’t be criticized or shamed but rather, supported and coached to get better.

Break the most dangerous habit in business: “We’ve always done it this way!”

When we refuse to change, our failures become more severe. Refusing to change is one way to eventually stave off the progress of our species. Still, most are not only afraid to accept change, but they knowingly fight to hold it back and resign to a fixed mindset, discouraging growth, stagnating, and remaining static against their natural will to evolve into something better. On the other hand, when we embrace a growth mindset, we press through fear and develop new ways to get things done.

Leaders have generally been gray-haired white males, not because they are the most competent, but because this is how we’ve always done it. Many among them enjoy privilege and so they have come to savour the power of authority, remained focused on position, and cared more about rank than serving others.

It’s time such leaders made room at the top so we can see more diversity and other types of leaders ease their way in, leaders of different genders, diverse ethnicity and even academic backgrounds.

It’s time to break the paradigms of doing it the way we’ve always done it because this not only kills creativity but can also be very dangerous.

Bringing it all together

If the past two years offer any lesson at all, it’s that our views have been myopically constrained in one area: surviving the pandemic. But looking deeper, we can see that we have been battling many other viruses, like racism, hate, and discrimination. So as we build the next normal and lead through and out of this crisis, we must realize that we can’t lead the way we led before the pandemic.

Therefore developing emotional intelligence is even more critical now than ever before. Getting clear on how to lead by example, listen with empathy, and serve with heart aren’t just soft skills, they are essential to our success and survival, as leaders and as humans. Today’s leaders know that it’s time we strive to usher in a universal system of belonging where we all thrive and feel safe. This is neither naïve nor myopic, it just requires a lot of effort, from each one of us.

Don’t get hijacked by your emotions

Trust, the Foundation of Effective Leadership

Leader of the Pack

The Strength of Kindness